With the Partners' day still on our minds, we entered the Barcelo Sants hotel and we ventured inside the Moodle room. There, most of the 840 participants of the Global Moot, were waiting for the keynote from Martin Dougiamas. It was a room packed full with energy and ideas waiting to be unleashed throughout the Moot.

After the keynote, we had a short coffee break before we split into the different parallel sessions. We will reserve some space at this point, to mention the wonderful catering throughout the event. Great coffee, amazing desserts and food, kept us energised and ready to go for all the sessions that the organisers of the Global Moot, had put together for all of us.

Our Eummena team members were participating in all parallel sessions, following and keeping notes of interesting applications and use cases of Moodle. When we weren't doing this, we were welcoming people at our stand, as a Silver sponsor of this year's event. Click on the accordion below, to read some key takeaways from day one.

While the other sessions were ongoing, in the main room, we joined the presentation by Chris Nelson and Tim Hunt from the Open University in the UK. For all of us in the Moodle community, Tim and Chris are two people that have connected their names with the development of numerous plugins for Moodle that are widely adopted and used. 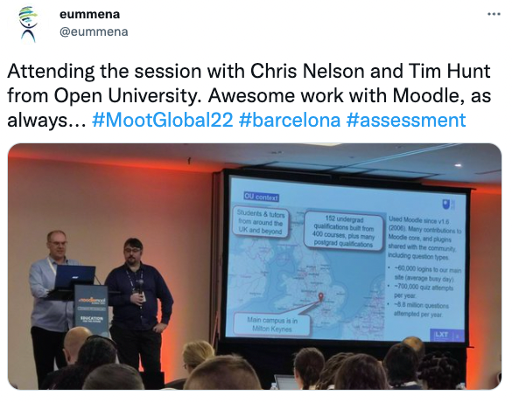 This was the session to be, if you are in quizzes, as a couple more of the sessions focused on aspects around quizzes. What we kept, are the quiz features shared by Tim and Chris, related to the customisation of question numbers, sectoral weighting, new question types (crossword) and matrix/sorting questions.

In this session, we enjoyed the presentation from Antonino from our partner ReadSpeaker. Antonino discussed content accessibility not only for people with permanent disabilities, but also for people with temporary or situational disabilities. The session was an eye-opener for many people in the audience and helped all of us to appreciate the usefulness of solutions like ReadSpeaker, even for people that have no disabilities whatsoever. 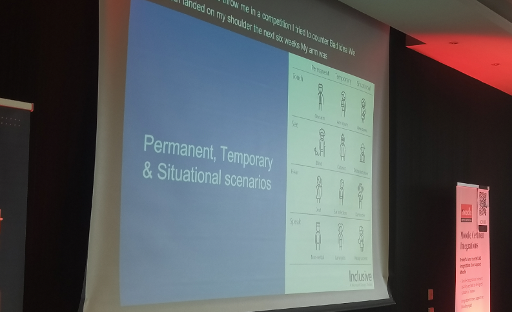 If you want to know more about what ReadSpeaker is about, please visit the recent announcement for the certified integration of RS into Moodle.

The session started with a very interesting presentation on what Moodle Academy team is doing. We were presented with the plans of the new offerings of Moodle Academy as well as an overview of the current ones, and plans for future development. If you're looking to get training on Moodle, this is the place to be!

The second part of this session was about the translation plugin of Moodle, an amazing tool, just recently launched, that makes the process of content translation in Moodle, easy and efficient. It can be used to translate all your courses into multiple languages. If you're interested, jump to our contact form, we will be happy to discuss this further.

The most inspiring talk in this session, came from Mrs. Linda Wright, from the Sioux-Hudson Literacy Council that spoke about using Moodle offline in Corrections Environments. We were taken aback by Linda's persistence and efforts that allowed her to use Moodle inside a correction facility, giving the opportunity to inmates to follow courses. 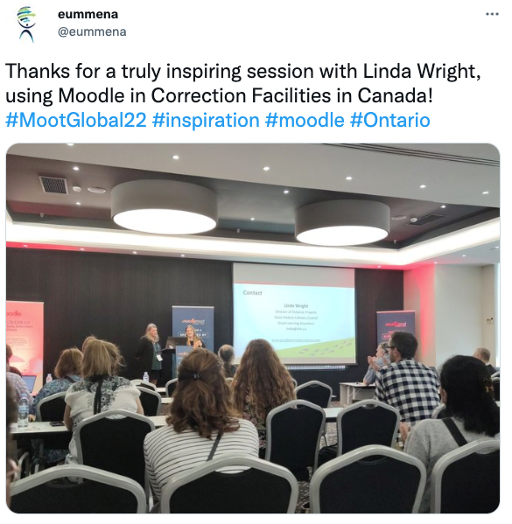 The WOW factor of the talks, came with Mr. Nicholas Bovee that created one course in Moodle, where he created 700 groups! And the surprise for the audience was the Moodle was able to handle this without any issue. Of course, the amazing work carried out from Nicholas and his team, extended to more things, such as a custom Gradebook, a forum sidebar, and other interesting features that were built to facilitate their work on Moodle, with success.

In this session, an interesting talk came from Ethiopia, with the presenter, Mrs. Daphne Elberse from Health[e] Foundation. The specific project, used Moodle to empower matrenal and newborn healthcare professionals in Ethiopia, with blended learning programs. 539 midwives were trained through this program, using Moodle and SCORM packages. What stood out the most, is that 75% of the trainees accessed the LMS from their phone.

In this session, we focused again on assessment with Moodle and we were fortunate to watch the presentation of two models for assessment for Moodle courses. One case came from Japan and the other from Estonia, showcasing 2 different approaches, but with lots of common ground. 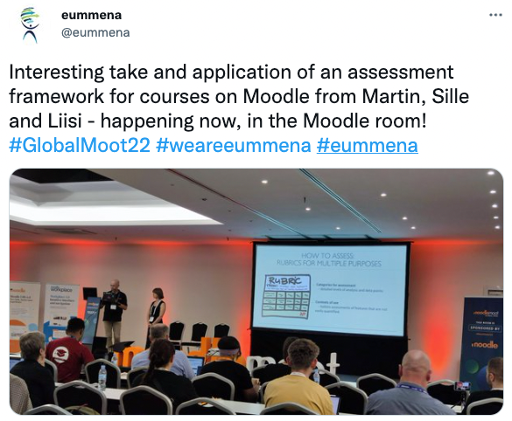 For us, advocating about the quality of content, and following our own in-house quality assurance process for developing courses in Moodle, this was a very important session. We were glad to see that people are using rubrics together with Moodle activities, to encourage course creators to evaluate their work, as well as the work of their colleagues.

Towards the end of this long but interesting day, we also had Moodle's birthday. Our beloved Moodle turned 20 years young, and we had a cake and biscuits to celebrate it.

Despite the long day, we did manage to walk around Barcelona enjoying some local as well as some "imported" dishes, adapted to the Spanish culture. And although this is not a travel blog, we will still share the address of Mimo's Born. If you're reading this and you are planning your next trip to Barcelona, the area is very nice for a dinner or some drinks.